Russian Formula One driver Vitaly Petrov gives his support to Robert Kubica and wishes team-mate all he best after Polish driver had serious crash in the morning of February 6th while rallying in Italy.

Propose your color scheme for the helmet of Vitaly Petrov to get special prize with the autograph of Russian racing driver!

Authors of five best works will awarded by prizes with Vitaly’s autograph, while competition winner will obtain a replica of helmet with his design.

Vitaly had the honour of giving the R31 its first run on track today as winter testing got underway in Valencia.

Vitaly Petrov: "Determined to do well and fight hard"

The 26-year-old Russian looks ahead to his second year of Formula 1 as he aims to build on a character-building 2010 season.

On January, 13 Vitaly Petrov and Eric Boullier unveiled the new livery for 2011 at the Lotus stand during Autosport International Show in Birmingham. This was the first time that the media and the public were able to see the new colours of Lotus Renault GP that will be on the 2011 car. Vitaly and Eric also gave a number of interviews to the media that was present at the show.

Lotus Renault GP is delighted to announce that Vitaly Petrov will complete its driver line-up for the 2011 and 2012 Formula 1™ seasons. He will partner Robert Kubica next year. 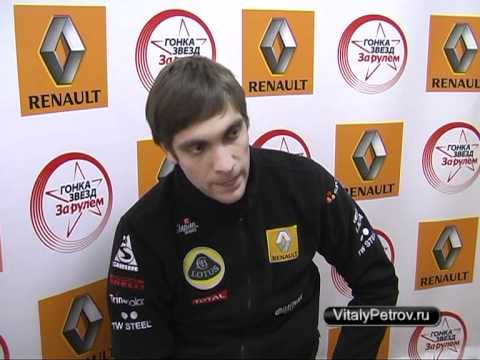