Vitaly Petrov: "Determined to do well and fight hard"

Vitaly, you're entering your second season of Formula 1 as a Lotus Renault GP driver. How does it feel?
I'm really proud to be here and I hope together we can achieve some great things. The team has shown a lot of faith in me and it's my chance to show everybody that they were right to believe in me.

Do you feel ready to deliver?
Everybody knows that 2010 was not that easy for me, but after a year in Formula 1 I feel more confident and ready to face the challenge of 2011. I know what I need to change, where I can improve and I'm determined to do well and fight hard for this team.

You're no longer a rookie and you've seen how Formula 1 works. Will that change your approach this season?
2010 was a long season and I learned a lot, so it's natural that I will come back with more experience and as a better driver. I now understand how difficult Formula 1 is on every level and I know that even a small mistake can have a big impact on your weekend. My focus this year is to make sure I put everything together, maximise all the sessions and stay concentrated all weekend long.

What do you think about the new rule changes that have been introduced this year?
I think it's good for Formula 1 and I know that the team has been working for a long time to make sure we get the most from the new technology on the car. For me it will be more things to learn and adapt to because I've never used KERS before and the adjustable rear wing is new for everyone. But I think the biggest challenge is getting used to the new tyres and a big part of winter testing will be trying to understand them. I think this is the biggest task facing the team.

What goals do you have in mind this season?
That's always a very difficult question to answer, especially before the start of winter testing. And even when you start testing, it's difficult to know who is really the strongest and how you compare. It's only when we get to the first race in Bahrain that we will find out who has done the best job over the winter. So it's difficult for me to set objectives until we know the facts.

How have you prepared for the new season?
I went home to Russia for a holiday with my family and friends. It was a chance to simply relax and switch off for a while. Then, I started doing some training, things like football and even some cross-country skiing to maintain my fitness. At the start of January I moved to England and I've been spending a lot of time in Enstone with the team. I think this is important because it helps strengthen my relationships with the engineers, mechanics and the people around me. By living near the factory and being there during the week, I hope that I can be as prepared as possible for the new season. 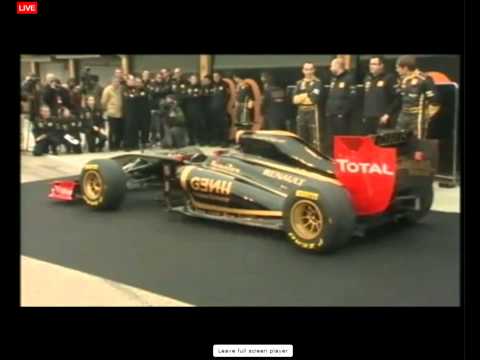